9 amazing places to visit in Madrid

With a population of more than 3 billion people, the capital of Spain is also the largest city of the country. The elegant bustling boulevards lead to oasis of green. Home of famous museums and the Spanish Royal Palace, the city offers great opportunities for cultural and social activities as well as moments of relaxation. The following 9 places will give you a glimpse of the culture and history of this beautiful city.

The official residence of the Spanish royal family is located in the city center near the Spain Square (Plaza de Espagna), a few minutes walk from the Gran Via boulevard. According to historians, on the site of the current palace initially there was an Alcazar (Moorish palace or castle) built by Muhammad I of Cordoba, finished in 880. Throughout the centuries, the palace was renovated and remodeled several times, however in 1734 it was completely destroyed by a fire. The palace as we see it today is a relatively new construction from the 18th century built on the request of King Felipe V.

The tour begins at the Grand Staircase made of one block marble stairs. Opposite the entrance the statue of Charles III in Roman toga is greeting the visitors.

Grand Staircase
Police at the Royal Palace of Madrid

The tour leads through several exquisite rooms such as the Gasperini Room, which was Charles III´s guest and dressing room.​Designed in baroque style, the room is richly decorated from ceiling to floor and the walls are covered with embroidery made of silk with gold and silver. The Porcelain Room showcases richly decorated white, golden and green ceramics. The ceiling and walls are decorated with porcelain flowers intertwined with Asian and European floral motifs. The tour continues with the throne Room, the frescoes of which are representing gods from Olympus as well as the kingdoms of Spain and its colonies. Several golden framed high mirrors are covering the walls and two bronze lions are edging the thrones. The Salon of Charles III is abundant in ceiling painting, golden tapestry on the walls well reflected in the large mirrors and beautifully illuminated due to the earrings-like chandeliers.

In the middle of the palace there is a large Royal Chapel with seats for the royal court, the organ, thrones for the king and the queen and the altar. The Queen´s apartments and the banqueting hall allow you to get a glimpse of the lifestyle of the Spanish royal family.​

From the Plaza de la Armeria you can enter the Royal Armory, exhibiting a rich collection of armors including pieces from the 13th century. It is considered one of the biggest armor collections in the world.

Opposite the Palace is the Almudena Cathedral, a neo-Gothic cathedral finished in 1993 which was constructed on the site of a medieval mosque. The neo-Gothic interior houses contemporary chapels and statues.

Situated to the south from the Almudena Cathedral, the Roman Catholic church designed in neoclassic style is worth visiting not only for its beautiful interior, but also for the famous Goya and Zurbaran paintings that are exhibited here.

Considered one of the most beautiful cathedrals in Spain, The Royal Basilica of San Francisco el Grande has an amazing 33 m high dome. The sacristy contains a large painting exhibition in several rooms decorated with amazing wooden carved furniture and doors.

Surrounded by many churches, Plaza Major is a beautiful square with many souvenir shops and coffee shops. The Bakery House (Casa de la Panadería) is also located here, and today functions as the city´s Tourism Center. The square is hidden behind buildings and can be entered through the arcades of the surrounding buildings.

The Golden Triangle of Art

The Golden Triangle of Art designates the 3 famous museums of Madrid exhibiting thousands of paintings from world-known artists: Thyssen-Bornemisza Museum, Prado Museum and Reina Sofia Museum. Thyssen-Bornemisza Museum is the famous art museum hosting more than 1600 paintings by painters such as Jan van Eyck, Albrecht Dürer , Rembrandt, Tiepolo, Claude Monet, Edgar Degas, Camille Pissarro , Paul Gauguin, Francis Bacon, just to mention a few of them. The Prado Museum has a rich collection of several thousands of paintings, including works by Goya, Bosch, El Greco and Velazquez just to mention a few of them covering a period between the 12th and the 19th century. The Reina Sofia Museum is the third member of the ˝Golden Triangle of Art˝ and has a large collection of Spanish and international artists from the 20th century, such as Pablo Picasso, Salvador Dali, Pablo Serrano, Francis Bacon, Yves Tanguy, Donald Judd and many others.

The Temple of Debod

The Temple of Debod was constructed in Upper Egypt, 15 km south of Aswan and consisted initially of a small chapel dedicated to the god Amun. During the Ptolemaic dynasty the chapel was extended to form a small temple which was dedicated to the goddess Isis. The decorations of the temple were finished by the Roman emperors Augustus and Tiberius.

In 1960 Egypt started to build the Aswan High Dam which meant the destruction of the place where the Temple of Debod was located. Due to the intervention of the UNESCO, the Egyptian state decided to donate the temple to Spain expressing thus their gratitude for the help received while relocating the Abu Simbel temples.

The Temple of Debod was moved to Madrid in the Parque del Oeste, close to the Royal Palace of Madrid. 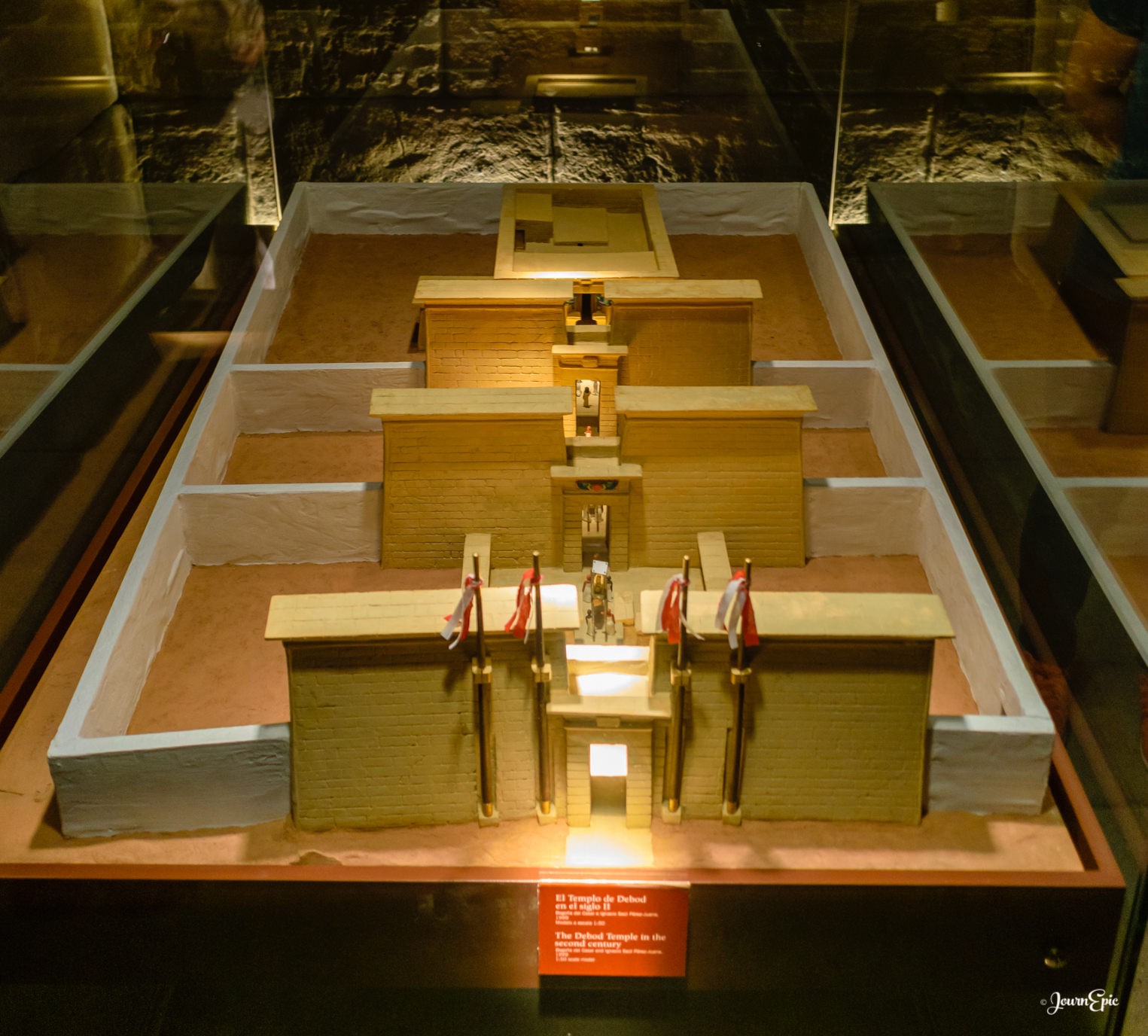 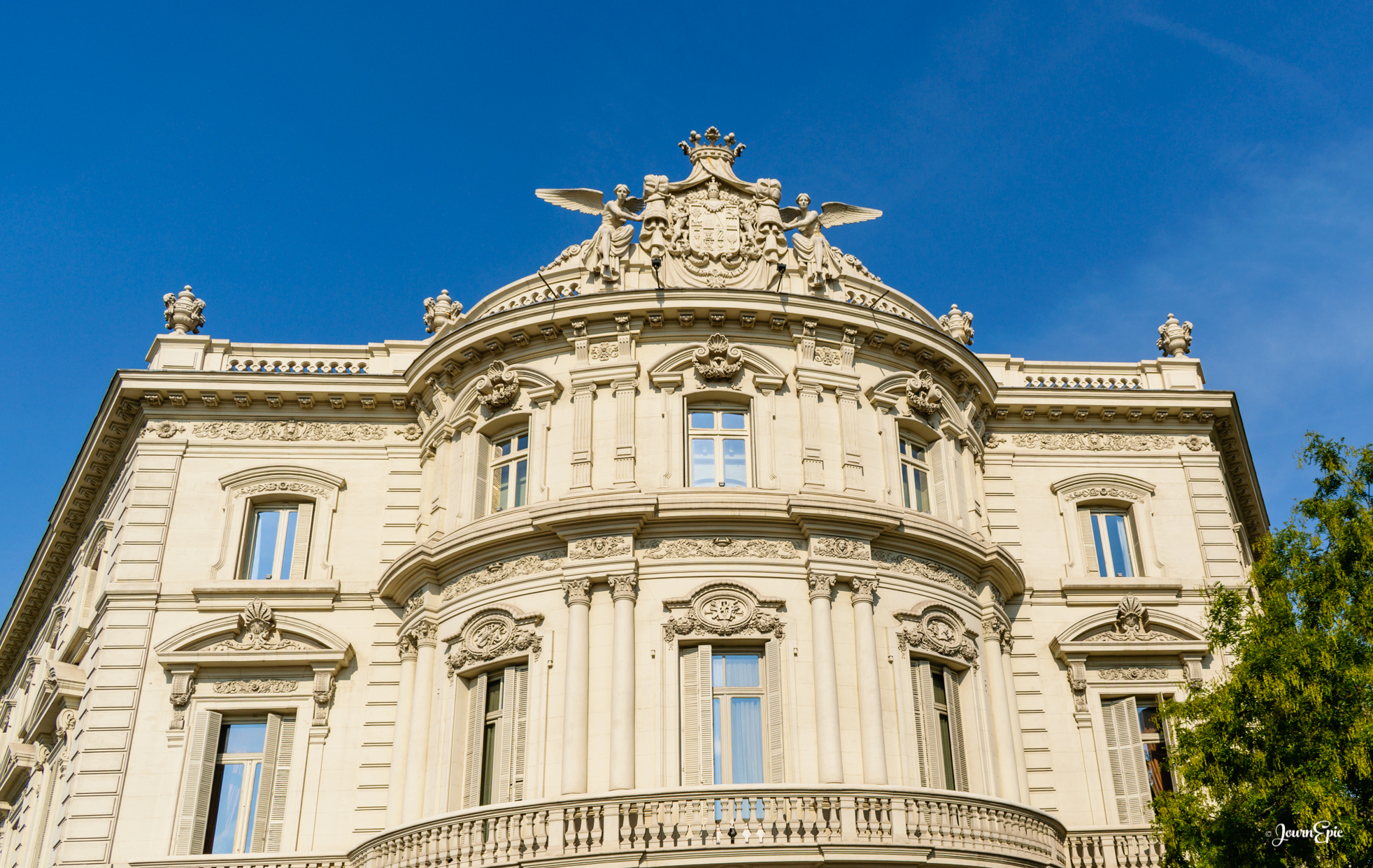 Gran Via, called also the Spanish Broadway, is the most famous shopping street of Madrid. The street extends from Plaza de Espagna to the Calle de Alcalá. The busy street gives place to world wide known shops, international and local coffee shops and restaurants. Visitors will be amazed not only by the extravagant and delicious food and merchandise, but also by the architecture giving home to these specialties.

Plaza de Espagna, edging Gran Via on the Western side, is memorable for hosting the monument of the famous Spanish writer Miguel de Cervantes, being surrounded by imposing buildings such as the Edificio Espagna and the Tower of Madrid.

As you go further on Gran Via towards East you will discover beautiful Belle Époque buildings from the beginning of the 20th century. The most remarkable among them is the Metropolis Building, designed by Jules and Raymond Février at the request of the insurance company La Unión y el Fénix. The building was constructed during the time when Gran Via was in its design phase and to give place to this masterpiece 5 homes were demolished.

In 1972 the Metropolis Building changed owner and was acquired by Métropolis Seguros. The building was renovated and the original statues of Phoenix and Ganimede standing on the top were replaced with the statue of goddess Victoria. Constructed in Beaux-Arts style, the cupola was embellished with 30000 leaves of 24 carat gold.

Gran Via continues on Calle de Alcalá where you can find the famous Cibeles Square with the Fountain of Cybele in the middle of the square.

The square is edged by the Cybele Palace which was initially the main post office of the city after the construction finished in 1919. Currently the palace is the seat of the City Council. 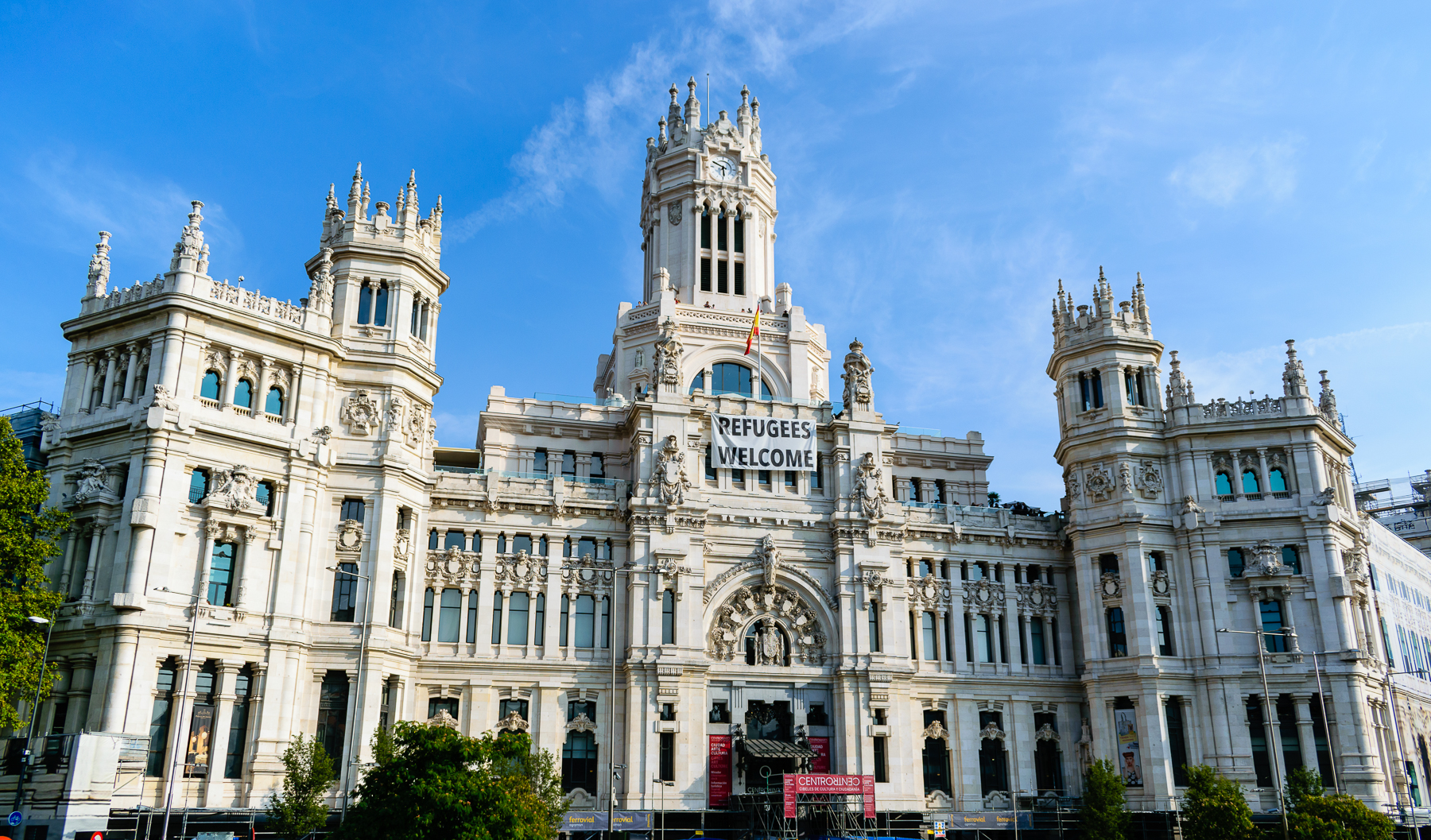 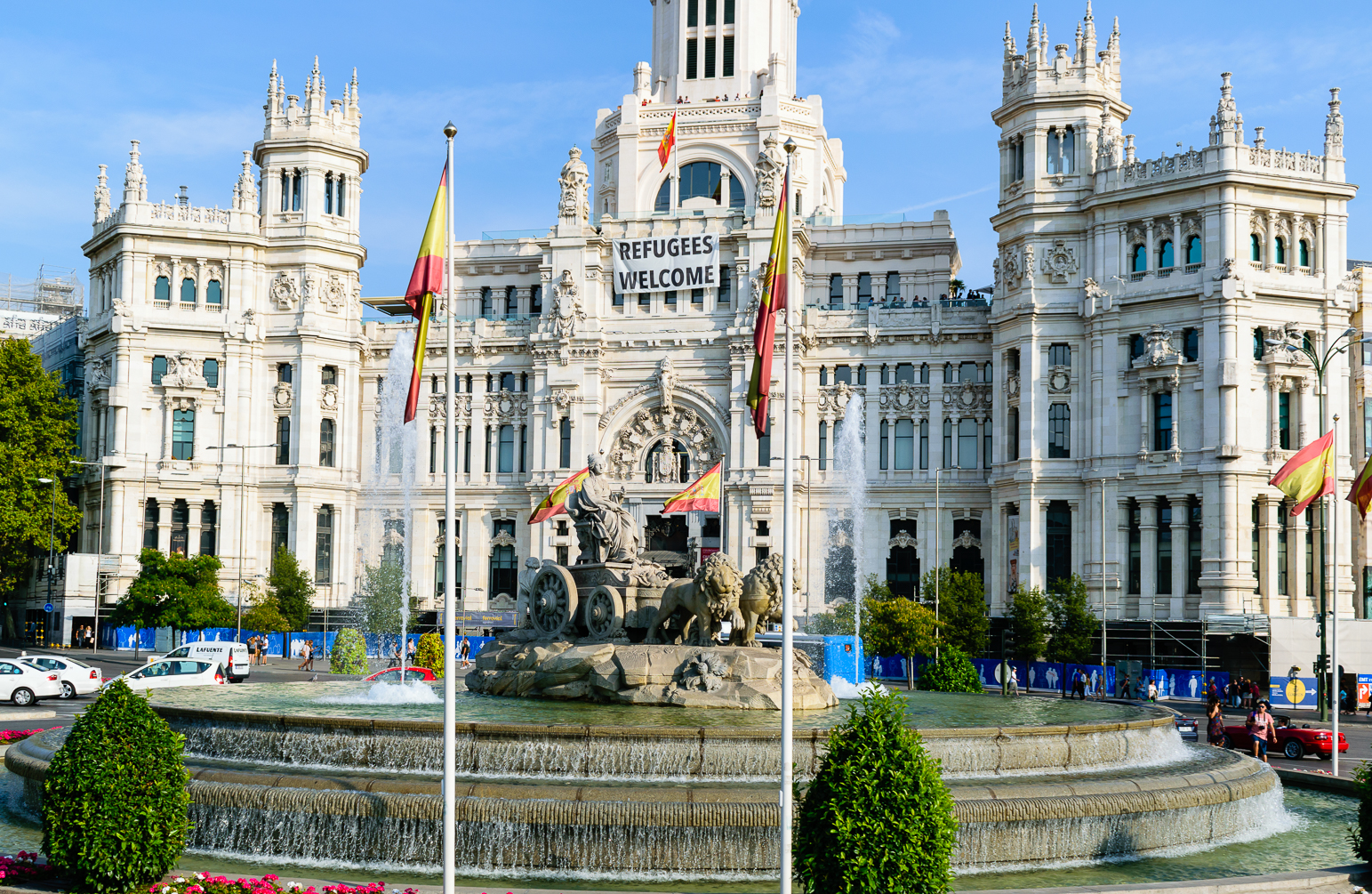 Close to the Cibeles Square is the most beautiful park of Madrid, the Buen Retiro Park. A true oasis in the city center, the Buen Retiro park extends on 1.4 km square area, including unique buildings such as the Crystal Palace and the Velazquez Palace.

The park has beautiful fountains and a large lake where you can paddle around in a rowboat.

AZCA Center is the business area located in the Northern side of Madrid where beautiful modern architecture gives home to international businesses in all sectors. Torre Picasso (157m), Torre Europa, BBVA Tower and the Gate of Europe embellish the skyline of Madrid. Hoping on one of the city tour buses you can get a glimpse of this amazing part of the city.

Itineraries: Historical Madrid (from Prado Museum to the Botanical Garden)

Everything you need to know to buy tickets for the Alhambra

6 places to visit in Seville